The herbal tea yerba mate is claimed to have the strength of coffee, health benefits of tea and euphoria of chocolate, due to its pharmacological composition.

But does yerba mate increase cognitive function enough to be considered a nootropic?

What Is Yerba Mate?

The flavor of yerba mate is said to resemble a mixture of herbs, vegetables, and certain types of green tea.

Yerba mate has a number of vitamins, such as vitamin C, vitamin E, and minerals such as zinc, and selenium. Yerba mate is especially high in polyphenols.

Tim Ferris, author and entrepreneur, credits yerba mate as being an underrated nootropic. Tim has even said that drinking yerba mate helped him write more than half of his best-selling book The Four Hour Body.

In his book The Four Hour Body, and in reference to increasing the speed of gastric emptying, Tim wrote:

“I accomplish this primarily through caffeine and yerba mate tea, which includes the additional stimulants theobromine (found in dark chocolate) and theophylline (found in green tea). I consume 100-200 milligrams of caffeine, or 16 ounces of cooled yerba mate.”

Many people report that yerba mate produces a less ‘jittery’ feeling than coffee. This is one reason why the herbal tea has grown in popularity as an alternative to coffee.

We don’t yet have any human studies showing the nootropic properties of yerba mate. But we do have studies on the nootropic effects of compounds within yerba mate, such as caffeine. 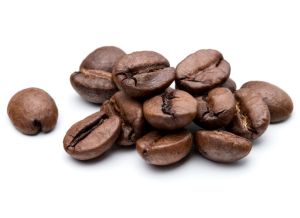 One reason yerba mate may act as a nootropic is because it contains caffeine.

Caffeine is a central nervous system (CNS) stimulant, and is also the most widely consumed psychoactive drug in the world.

Caffeine works by blocking two of four adenosine receptor subtypes (A1 and A2A). Adenosine is an inhibitory neurotransmitter which induces feelings of sleepiness (1, 2, 3). Blocking adenosine promotes wakefulness. As well as blocking adenosine receptors, caffeine increases the activity of neurotransmitters such as dopamine, serotonin, acetylcholine, and other neurohormones such as norepinephrine. Alterations to these neurohormones directly affect markers of cognitive performance such as alertness, energy, working memory, and general well-being.

In another study, researchers examined the dose-dependent cognitive effects of caffeine on 68 sleep deprived U.S Navy Seal trainees. All 68 trainees were assigned to consume either 100, 200, or 300 mg of caffeine or placebo via a capsule post-72 hours sleep deprivation (5). For context, one average cup of coffee has roughly 95 mg of caffeine. Researchers ran cognitive tests on the caffeine and placebo group to examine visual vigilance, working memory, mood, and reaction times.

The researchers concluded that in these adverse circumstances (three days of sleep deprivation), caffeine was still able to improve markers of cognitive performance. 200 mg of caffeine seemed to be optimal (the equivalent of just over two cups of yerba mate).

Several other well-designed studies have shown that caffeine can reduce symptoms of depression, improve memory, focus and other measures of cognitive performance. Large-scale population studies also suggest that caffeine may help protect against debilitating age-related cognitive diseases such as dementia and Alzheimer’s disease (6, 7, 8).

Theobromine is typically used as a milder alternative to caffeine, which means it could be an effective alternative for people who have some sort of hypersensitivity to caffeine.

Based on the research we do have, theobromine doesn’t seem to affect mood or cognition to the same extent that caffeine does (13). In one study, researchers compared varying doses of theobromine (250, 500, 1000 mg) to 200 mg of caffeine.

And the researchers concluded that,

“theobromine generally lacked caffeine-like self-reported effects despite our use of a broad range of theobromine doses and a relatively large sample size of individuals” (14).

According to this study, not even increasing a theobromine to 1 gram caused any caffeine-like effects.

So, how can we apply this research to yerba mate?

It seems that yerba mate does have nootropic properties, but these are primarily (if not exclusively) due to caffeine.

Polyphenols are micronutrients abundant in plant-foods, known for their health benefits. Plants naturally contain polyphenols as a defense mechanism against environmental stressors, such as pathogens or ultraviolet light (15). Paradoxically, a plant’s defence mechanisms are partially why they are healthy for humans ~ a process known as nutritional hormesis.

Polyphenols can act as antioxidants, reducing oxidative stress in the body. Oxidative stress occurs due to the body’s inability to get rid of end-products (free radicals) from oxygen metabolism. Too many free radicals are toxic and can lead to deficiencies in cognition such as memory loss. The brain is very metabolically active, meaning it has a high demand for calories (energy). Because the brain has such as high demand for energy, it is more susceptible to oxidative damage on brain cells. Antioxidants, of course, help to mitigate this type of damage.

Yerba mate seems to be particularly high in antioxidants. One comparison examining 30 medicinal plants found that yerba mate had the highest level of antioxidants (16). One specific polyphenol in yerba mate called Caffeic Acid is protective against Alzheimer’s (17). A case-control study also found that there is an inverse association between yerba mate consumption and idiopathic Parkinson’s disease. This finding led researchers to hypothesize that yerba mate could be neuroprotective for the brains of people with age-related cognitive diseases such as Parkinson’s (18).

We don’t have any good quality controlled human trials on the nootropic effects of yerba mate, but we do have some interesting animal studies.

The researchers found that low to moderate doses of yerba mate extract (62.5 – 125 mg/kg body weight) improved short-term memory. The highest dose – 250 mg/kg – was found to disrupt the rats’ performance while they were navigating their cognitive performance test (the Morris water maze). The researchers concluded that the administered extract likely modulated the memory of rats via the antagonist action of the administered extract on adenosine receptors.

One study examined the effects of yerba mate extract on advanced glycation end products (AGEs). AGEs are harmful compounds which are created when protein or lipids combine with sugar in the blood. AGEs play a role in the development of the age-related neurodegenerative diseases such as Alzheimer’s disease. Researchers compared the effects of yerba mate extract and green tea on AGE formation. They found that yerba mate had a more significant effect on reducing AGE formation (20).

This reduction of AGE formation was also dose-dependant, further confirming that it was indeed something about the yerba mate per se which had significant effects on AGE formation. A study looking at the association of AGEs on cognitive function in people with and without type 2 diabetes found higher pentosidine levels (AGE) were associated with decreased overall cognitive functioning (21).

From these studies alone we can’t ascertain whether consuming yerba mate increases cognitive performance just because it could reduce AGEs. There simply is not enough evidence to make this assumption. 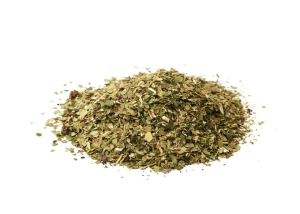 Moderate consumption of yerba mate in healthy adults is unlikely to cause any severe side effects.

Another reason yerba mate could be carcinogenic is simply due to how one consumes it. Exposure to hot liquid can increase cancer risk. Drinking hot liquids can damage respiratory and digestive tract lining which increases the proliferation of cancer cells (27, 28). However, this specific cause of cancer could, of course, be mitigated by drinking yerba mate when it’s at a cooler temperature ~ as with all other hot beverages

Sure, yerba mate seems to be associated with cancer in epidemiological studies. But this isn’t enough to make the claim that “yerba mate causes cancer”. Other studies show that compounds within yerba mate are protective against cancer (29, 30). According to a review published in the Pan American Journal of Public Health, we are yet to see any population-based, case-control studies on yerba mate increasing cancer risk (31).

I wouldn’t let the research on yerba mate and cancer scare you. Apply the principle of “everything in moderation”, just as you would with coffee.

There are compounds in yerba mate which might have monoamine oxidase inhibitor (MAOI) activity. MAOIs are typically prescribed to help with depression and other cognitive diseases such as Parkinson’s (32). MAOIs work by elevating  neurotransmitters through inhibiting an enzyme called monoamine oxidase.

Research in 2002 cited yerba mate as inhibiting monoamine oxidase (MAO) activity by 40-50% in vivo (33). The research on this is a bit undefined, and so if you have a prescription for a MAOI drug, then be sure to speak with your doctor about whether it’s safe to consume yerba mate.

To prevent insomnia, stop drinking yerba mate (or any caffeinated product) at least 6 hours prior to sleeping (ideally before 12 pm). Caffeine has been shown to decrease the secretion of 6-sulfatoxymelatonin (6-SMT), the primary metabolite of melatonin (the sleep hormone). By not consuming too much caffeine in the afternoon/evening, this will ensure you won’t disrupt your sleep cycle and you’re well-rested and cognitively agile the next morning.

It’s important to remember that although caffeine consumption is widespread and socially acceptable, we can’t forget that it is a relatively powerful psychoactive drug.

How you respond to caffeine is highly dependant on your genetics and tolerance. Self-experimentation is key to finding your ideal dose.

How To Prepare Yerba Mate

There are three simple methods you can prepare yerba mate: 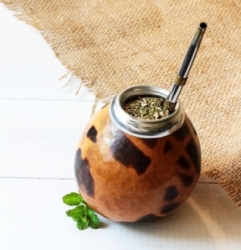 The traditional method requires you to buy a guampa (gourd) and a bombilla (straw). 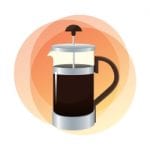 The French press method involves placing yerba mate into the filter of a french press, similar to brewing coffee.

You can also buy yerba mate tea bags, which is convenient.

Is there a specific dosage that’s ideal for the nootropic effects of yerba mate?

Not really. All we can base dosage on is caffeine, as this is the primary nootropic compound in yerba mate.

Caffeine dosage for cognitive performance is going to depend on several factors such as genetics, current sleep deprivation, tolerance, and many other factors such as what you’re mixing the caffeine with. Typically one to two cups (85-170 mg) of caffeine should suffice to help you focus on work, and perhaps slightly more (200 mg) if you’re sleep deprived.

It’s also important to consider that the concentration of ingredients you consume may vary based on the method of consumption, as well as the brand of yerba mate you’re using. For example, a highly concentrated extract could have more caffeine and but a smaller overall dose.

Follow the instructions of the yerba mate product you purchase, and make adjustments to your use based on your response.

Yerba mate is certainly not as powerful as some nootropics, but it does have nootropic properties, primarily due to the caffeine it contains. Yerba mate can be a great alternative to caffeine or tea.

Despite some epidemiological studies suggesting yerba mate is associated with cancer, no studies have verified a causative association. Moderate consumption is most likely safe for healthy adults.

Some animal research suggests that yerba mate may be protective against neurodegenerative disease, which could be due to the abundance of naturally occurring polyphenols in Ilex paraguariensis leaves.

Give yerba mate a try, and see if it works for you.

Philip Ghezelbash
Philip Ghezelbash is a medical writer, science graduate, ex-personal trainer, and the founder of Writing Studio. He is passionate about simplifying complex science to help people learn more about how they can improve their health.
Share105
Pin
Tweet
105 Shares
Previous Post: «