Summary: Read our review of NusaPure St. John's Wort Veggie Capsules to see if it is a product that we recommend trying.

Over the course of the last few years, I have come to appreciate the power of natural ingredients to cure many ailments. While doing some research on herbal nootropics for enhancing brain functions, I came across St. John Wort. The yellow flower heads of this plant are used for making medications that help in improving and maintaining healthy emotions.

I wanted to try this out so I tried consuming the flowers in various forms. I tried juicing it and powdering it before I gave up such trails and switched over easier options of simply swallowing St. John’s Wort capsules. I took the capsules as per the recommended dosage of 2 supplements, with my lunch.

For me, the effects of this supplement were palpable. Within a week of using it, I felt happier and more centered than in a long time. I also noted a significant reduction in my anxiety levels as I am a person who tends to get upset over the smallest issues. I was now able to stay calm and analyze the situation better. My emotions were no longer all over the place and I felt in control of my life.

St. John’s Wort is an age-old natural remedy used to brighten up someone’s gloomy day. It contains an active chemical agent, namely hypericin which uplifts your mood immediately. Each bottle of NusaPure’s St. John's Wort supplements have 180 capsules in them. They contain 0.3% hypericin for optimal brain support.

Consuming the recommended dosage of the medication regularly will immediately promote mental and emotional balance in your life. These capsules don’t have any taste or texture to them. These pills are suitable for vegetarians and vegans.

The St John’s Wort flower head extracts from NusaPure are fully organic and non-GMO. They are suitable for consumption for lactose intolerant individuals as well. They are also meticulously tested by third-parties to ensure these capsules deliver the promised dose of pure St. John Wort extract. NusaPure offers a full refund in case the capsules are not up to your satisfaction. 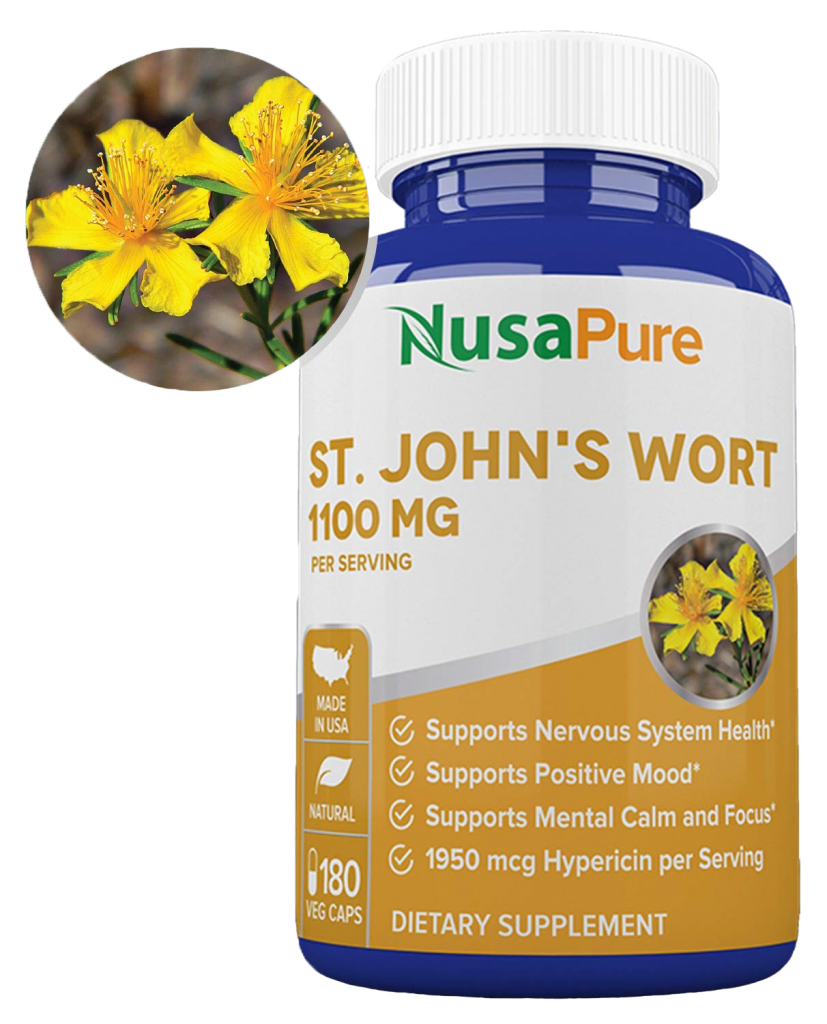 St. John Wort is known to provide a positive placebo effect while treating mild depression. This bright yellow flower increases the secretion of happy hormones like serotonin, dopamine, and noradrenaline. St. John Wort is thus considered to be a natural antidepressant as this spike in hormones helps you feel calmer and happier.

If brain activity remains calm and less erratic, patients of attention deficit hyperactivity disorder (ADHD) and social anxiety can become more productive. St. John's Wort is an ideal choice for them as it has a soothing effect on the brain.

St. John Wort is an ancient remedy to cure the emotional blues. Supplements made from the flower of this herb can help reduce depression and anxiety. The active ingredients in St. John’s Wort also influence your emotions and mood positively.

These capsules aren’t just for treating depression. If you are looking for a more focused and calmer outlook on things, NusaPure’s St. John's Wort is a good choice. Considering how St. John Wort boosts the production of happy hormones like dopamine and serotonin, it’s a must-have addition to your daily health routine. Don’t hesitate to try them out to perk up your days.