Summary: Read our review of Double Wood CDP Choline Capsules to see if it is a product that we recommend trying.

My college-going son is a diligent student who has always been among the top performers in his class. But in the past few months back he has had trouble concentrating on his studies. Even when he made the effort to do so, he was having trouble retaining what he learned. Whether his anxiety was leading to these issues or his stress was due to these problems was not clear, but clearly, his stress levels were too high and starting to affect his health. He was getting frequent headaches too.

A bit alarmed, I took him to our practitioner who suggested Citicoline supplements to help lower his anxiety, improve his focus and memory retention. We ordered Double Wood’s CDP Choline capsules from Amazon based on their 4.5+ star rating and satisfactory customer reviews.

My son started with the minimal dosage of 300mg, 1 capsule in the morning and another capsule after lunch. Both capsules were taken an hour after food to prevent any side effects. A week into the supplement, he was feeling more energetic and happier. His mental state continued to improve and by the end of the month, there were significant changes. He was thrilled that he could completely focus and learn as he used to. He also had no trouble recalling what he learned. He is planning to take this supplement for a few months, till his final exams get over.

Double Wood’s CDP Choline (Citicoline), a nootropic dietary supplement contains 60 medium, easy-to-swallow capsules with 300mg potent choline. It is obtained as an intermediate molecule in the generation of the brain chemical phosphatidylcholine (a substance found in the brain cell membranes) from choline.

The suggested serving is 1-2 capsules (300mg-600mg) to be taken after food in the morning and again if necessary, in the afternoon. This product is made and tested in an FDA approved facility in the USA. It is third-party tested, 100% Gluten-free and does not contain any GMOs. Capsules are made of gelatin which may not be suitable for vegans/vegetarians. It contains the additive Magnesium Stearate for lubrication and consistency. 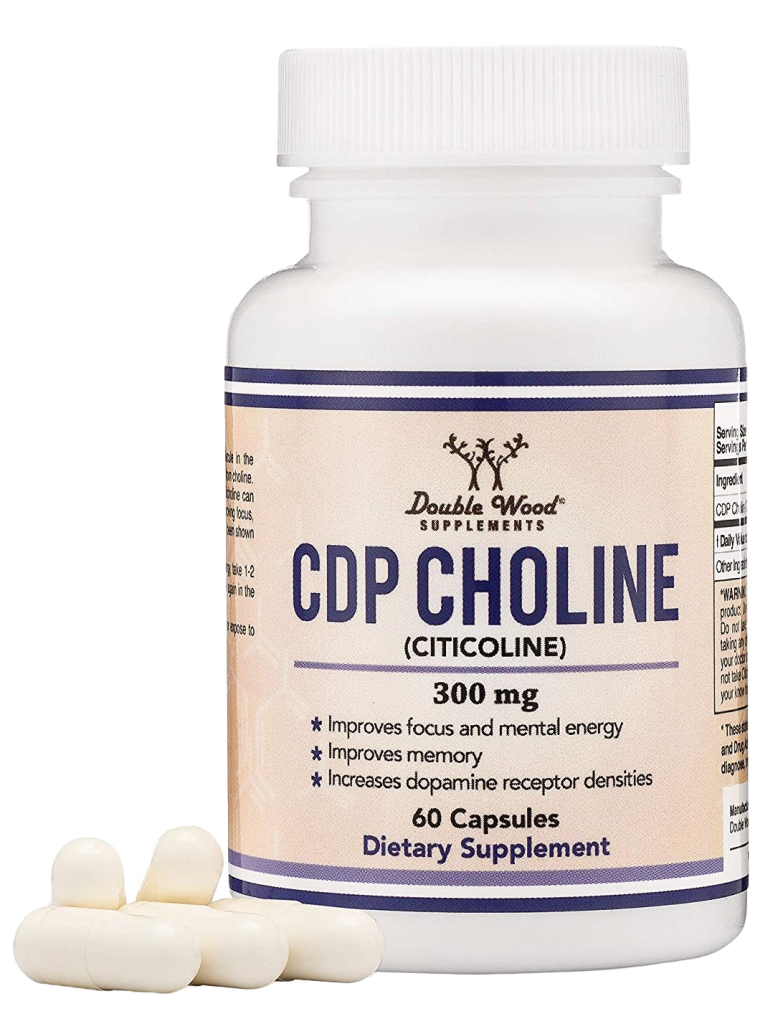 Citicoline is the generic name of the chemical cytidine-5′-diphosphocholine (CDP-choline). CDP Choline is known to be an extremely potent source of Choline. Non-toxic by nature, Citicoline is generally well accepted in human beings. Citicoline was initially used by the Japanese to treat brain-stroke. European countries made it a prescription drug later. In the USA, it is available as a supplement.

Research establishes that Citicoline may increase attention span, boost energy levels and enhance memory power. It is also found to stimulate the dopamine receptors in the brain to assist in the production of the mood-regulating chemical. Recent data show that Citicoline has neuroprotective capabilities and may help prevent neurodegenerative diseases.

Some clinical trials have observed that regular supplementation with Citicoline may help treat brain injuries by increasing the blood circulation to the affected areas in the brain. Studies also suggest it can support the treatment of brain-related ailments such as Parkinson’s, Alzheimer’s and certain cerebrovascular diseases.

As a general precaution, do not consume more than 4 capsules per day. Minor side effects that may occur include headaches, nausea, exhaustion, and gastrointestinal problems. These issues seem to be less when the capsules are consumed after taking food, rather than before food.

Since it is a brain supplement, a physician’s advice is recommended for those using any prescribed medications. Pregnant and lactating women should avoid using this product. It should be kept out of children’s reach. Double Wood offers a 100% money-back guarantee if you find their product unsatisfactory.

Double Wood’s CDP Choline capsules are a nootropic that increases focus and boosts long-term memory power. A potent, but a non-toxic supplement, it is usually well-tolerated in humans. Its neuroprotective abilities promote strong and optimized mental health.

It is an excellent cognitive booster that stimulates the brain’s defense mechanisms against a plethora of brain ailments. Place your order today to enjoy the benefits of improved cognitive functions and mental well being.